An adventure in two parts but united by a common weather theme; all four seasons put in a presence every single day.

Started with a solo paddle from Plockton across Loch Carron and to the bothy at Uags; most of the time was a nice downwind surf which the Pace 17 took in its stride – the original planned evening tour of the Crowlin Islands being left for day 2 as the wind was picking up from the north.  Met and chatted with some other paddlers enjoying their time in the area.  An evening in the bothy sheltered from the wind and rain.  Views across to Raasay were splendid. 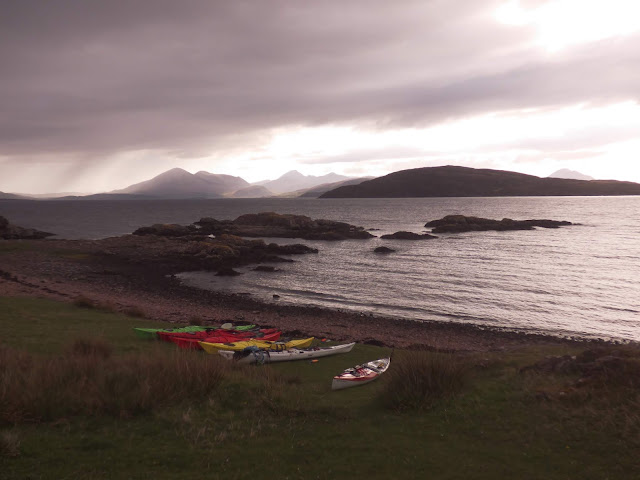 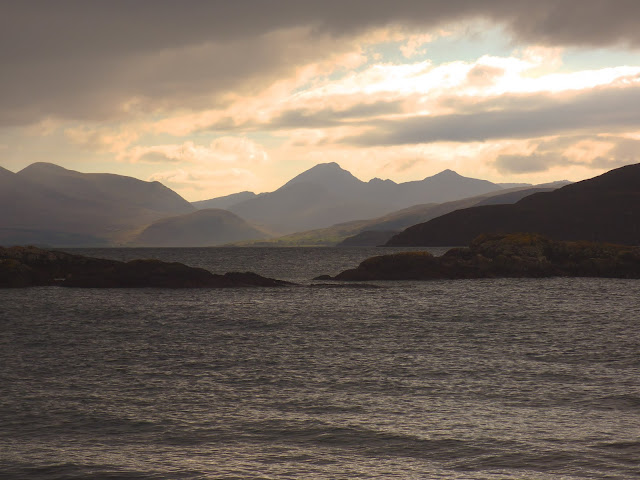 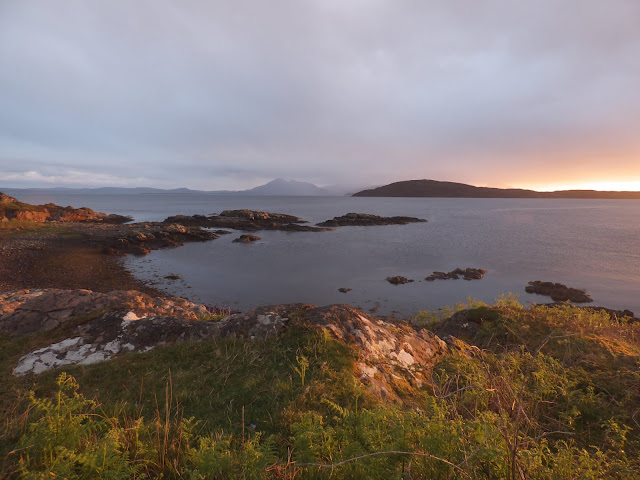 Day 2 was a cold spring one and I hugged the coast till well north (upwind) of the Crowlins before peeling off into the inner sound proper and again a run south.  The fully loaded boat did wallow a bit as I tried to go diagonally across the swell.  Made a mistake with my planning and found the middle channel between Eilean Mor and Eilean Meadhanach was dry at its far end.  Shame really as it was now directly upwind to get out of there! 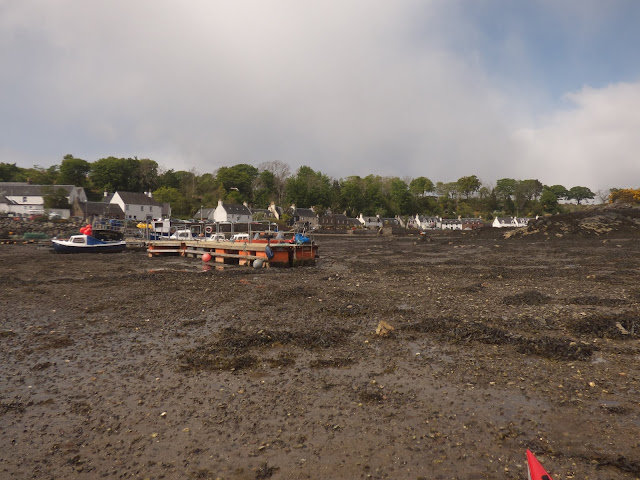 An easier paddle again up Loch Carron then saw a good few squalls blow hard through from Loch Kishorn.  One caught me right in the middle of the ferry glide across to the southern shore but didn’t last long.  The sun was back out as I got into Plockton bay and the tourists.  Timing again off as I was at least 50 yards of muck away from the landing pontoons – but  what’s a bit of muck to a salty seafarer?  37 kms overall for this solo loop.

Got packed and then went off for a feast in the Sligachen Inn whilst waiting on colleagues from NESKy to arrive.  A few beers later and we had re-planned the Raasay/Rona weekend into something heading down the narrows from Kyleakin towards Sleat.  That night it snowed on the Cuillin Ridge and left white frost outlines around each tent for us to see in the morning.  Sligachen is in some ways a mystical place with a great bowl of sea and mountain vista.  None too warm but the sun came out as we packed boats on Kyleakin front for some wild camp/cruising. 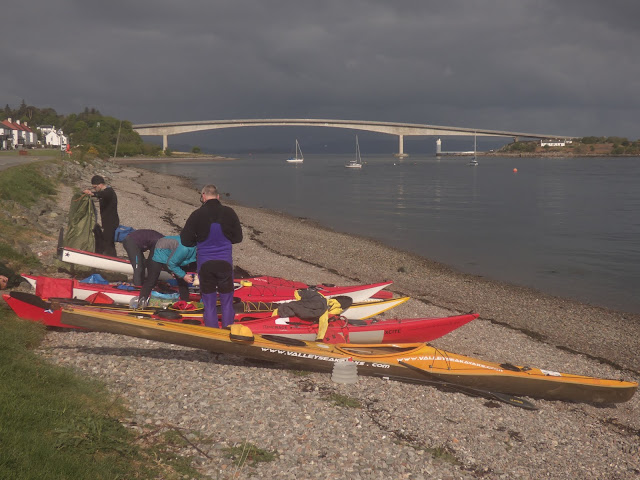 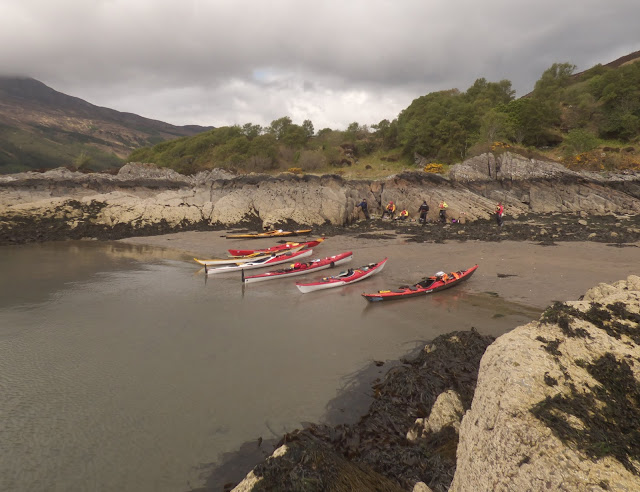 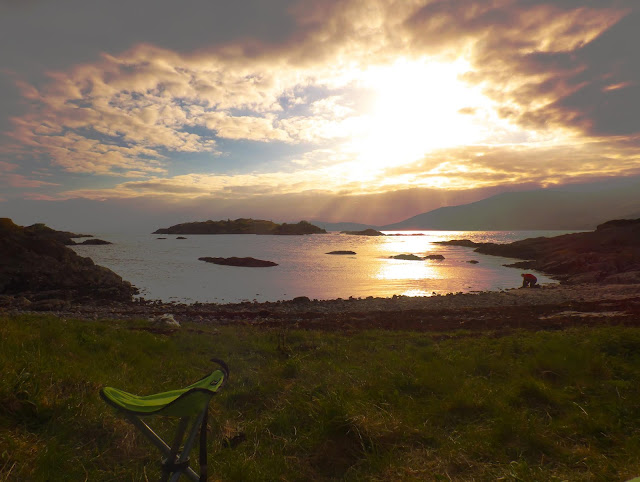 Up to 12 kph as we used the tide through the narrows of Kylerhea and then a loop of Glenelg bay just for fun.  Seven good paddlers in the group so all was well.  Moved on to camp on Sandaig Island which was windswept but very scenic.  A good evenings entertainment was had with  our leader getting the smokers’ prize for his fire raising skills. Day 1 had been nearly 18 kms.  Day 2 was the push further south down the sound, dropping into Isleornsay for a brew (and missing the tide to get out the east side of the bay).  Just 6 paddlers left now and we pulled in to the little beach just short of Point of Sleat (Camas Daraich) after 33 kms.  At one point we’d been making a fair speed on upperbody+paddle windage alone (fresh northerly all day).  There was a good fresh stroll down to the point and its “Flatpack” lighthouse as daylight hours were plentiful. 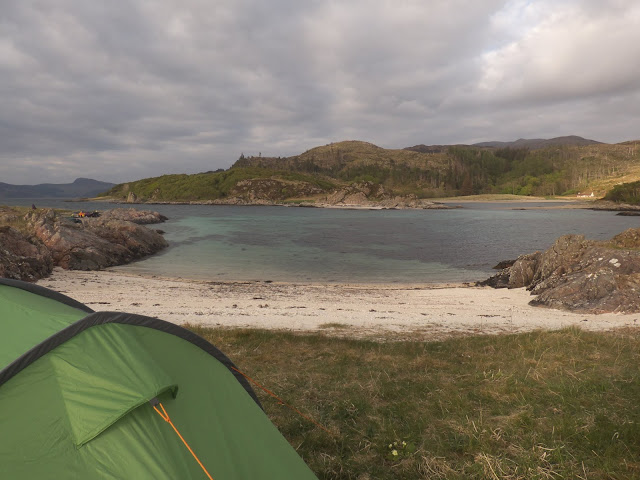 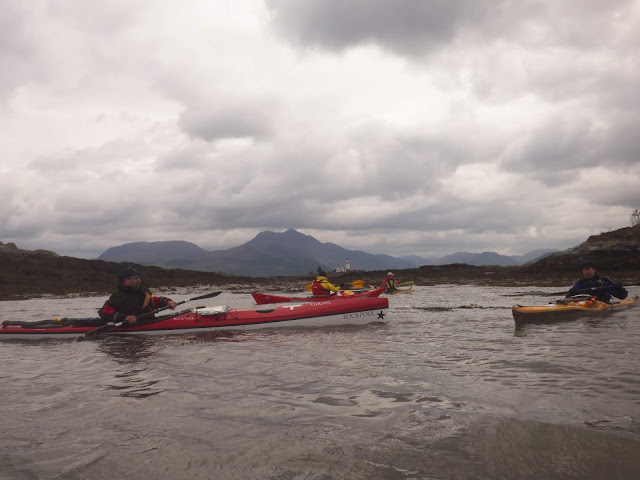 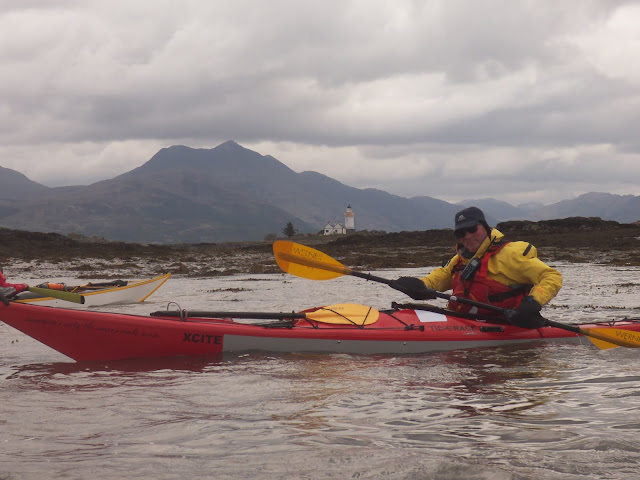 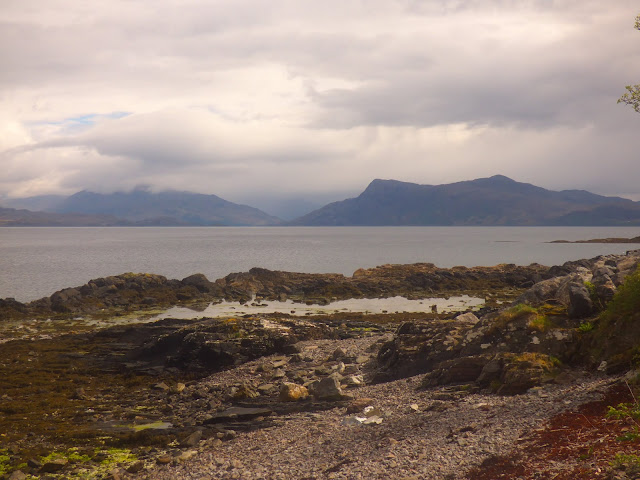 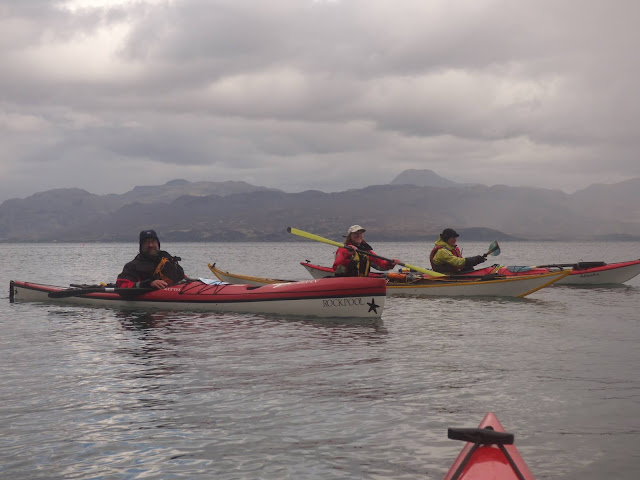 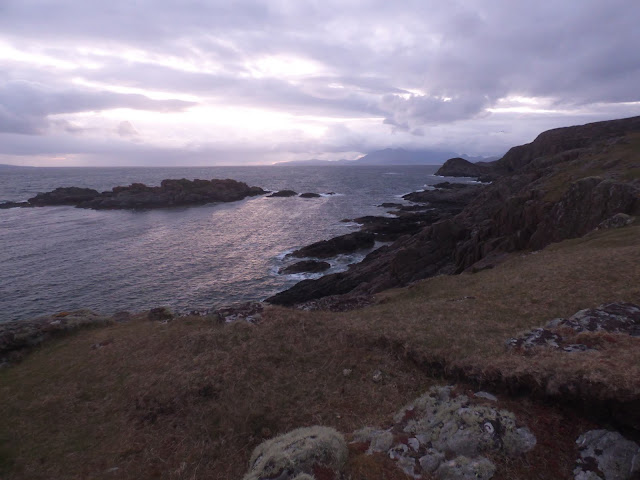 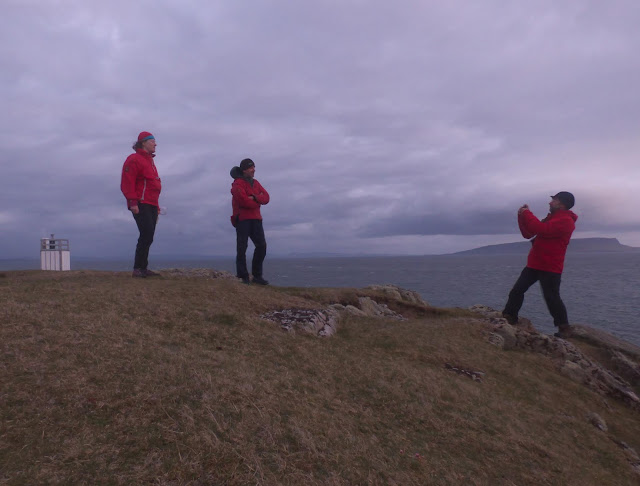 Final day was a bit shorter at 15 kms as we rounded the Point (swell not too challenging) and headed against the wind up the west coast of the peninsula.  A bit of rock hopping and we finished at Tarskavaig ready to retrieve cars.  Thanks to Alan for helping out.  Wildlife during the short adventure was pretty good with several otters, a porpoise family, a sea eagle plus the usual inquisitive seals and noisy gulls. 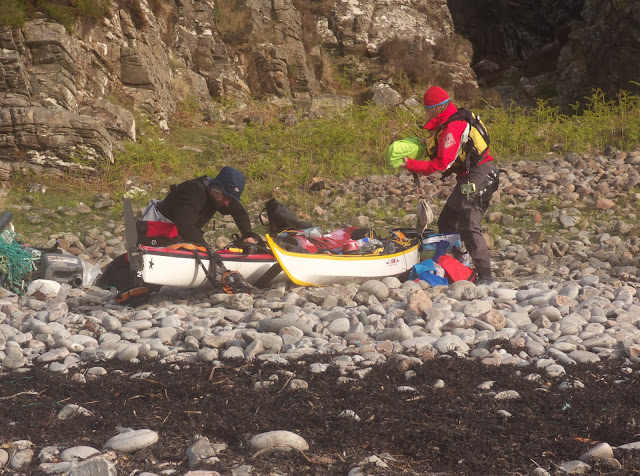 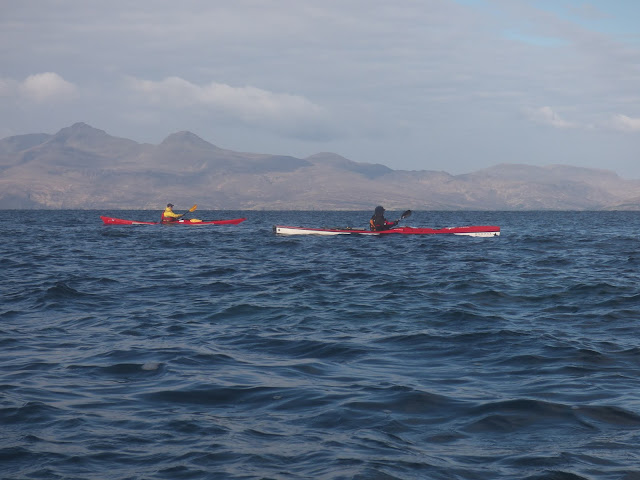 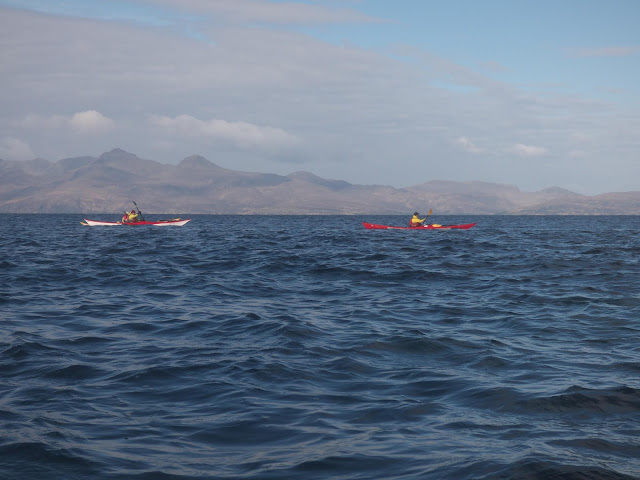 Good company and competent paddling made the 5 days a joy.

Great stuff Stuart - that week certainly had a variety of weather....